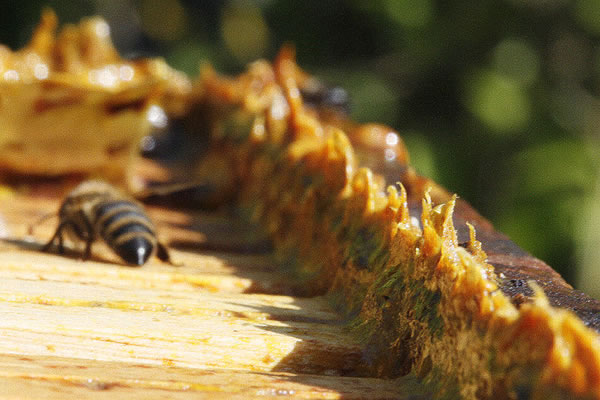 Propolis is another amazing compound created by the honey bee & found within the hive.
It varies in colour from dark brown to red it is a resinous mixture which is made up of over 50 constituents.
Typically it contains 50% resins and vegetable balsams, 30% waxes, 10% essential oils and 5%+ pollen.
The bees use it to fill gaps in the hive to keep their hive healthy.

It is believed they use propolis to:

If a large predator finds it way in to the hive (e.g. a field mouse) which they are unable to carry out they will use propolis to keep their hive healthy. They encase the predators carcass in propolis so that it essentially mummified which prevents it from decomposing and therefore harming the hive. The use of propolis in the hive creates a highly complex immune defence system which makes the bee hive the most sterile environment known in nature. Propolis is receiving significant investigation in the scientific community and laboratory tests are showing it to have anti-microbial and anti-tumour properties, immunostimulant effects and a role in dental care to name a few benefits.

More information about the Health Benefits of Propolis